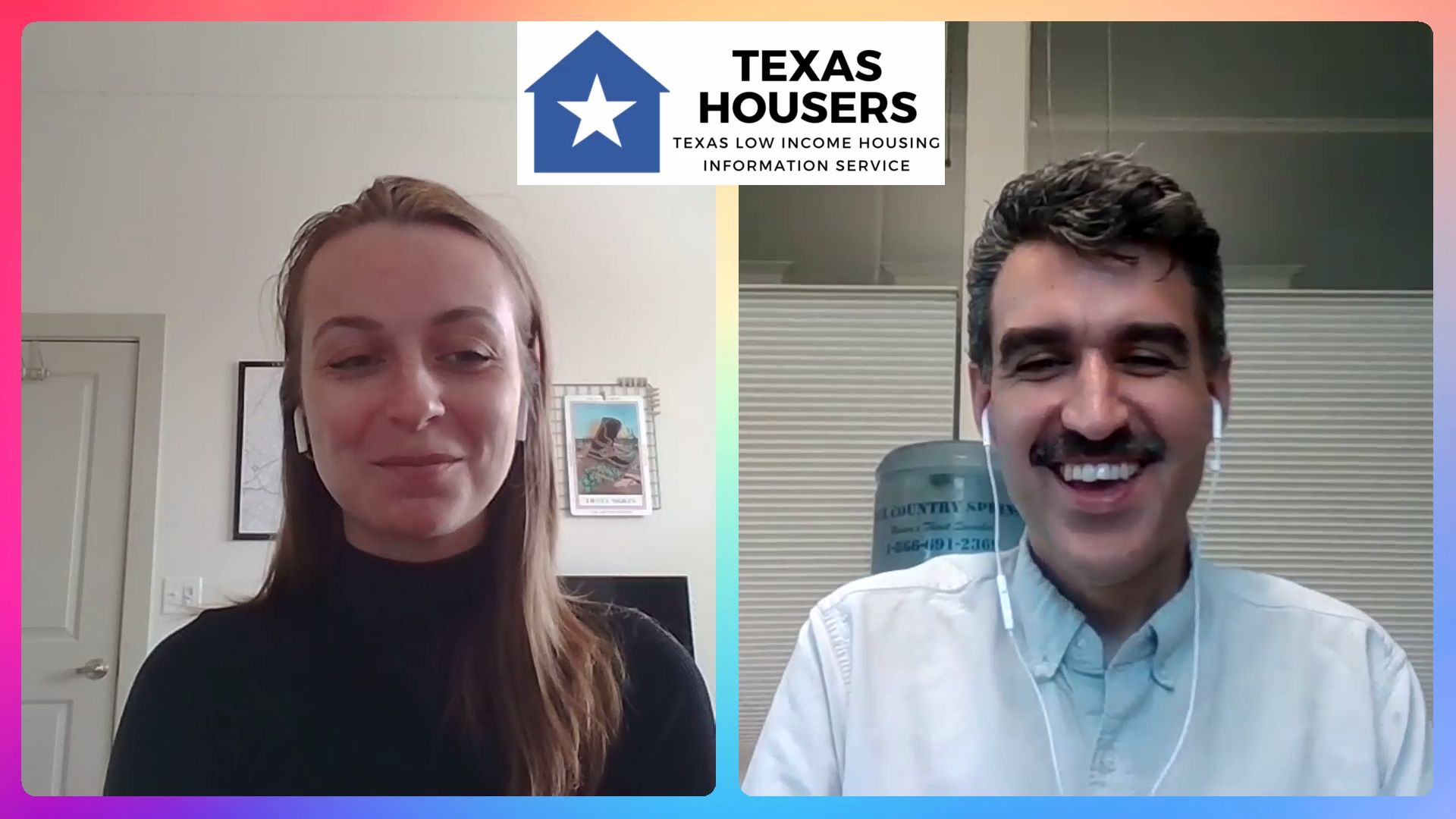 and I am research analyst, Erin Hahn,

and Erin and I are talking today about. emergency rental assistance and specifically, the recaptured process by the Treasury Department.

We have some concerns about how this is going on, so we're going to dig into it. First, quickly, let's just talk about what emergency rental assistance is. Erin, would you like to field that?

Sure. The federal emergency rental assistance program, was passed, last year and its purpose is to keep low-income renters housed through the pandemic.

We know that there are over 30 different ERA programs in the state of Texas, the State itself has an ERA program.

And then. 36. I think if I've got the number, right, counties and cities have ERA programs to serve their local, low-income renter populations and their landlords. So we know that several of these local programs have not met their obligations, to meet this upcoming deadline. What is Treasury say is going to happen when these jurisdictions don't meet this deadline.

So the Treasury has set spending targets that jurisdictions were expected to meet every two months and beginning in September of 2021. And so we've seen that some of the cities and counties in Texas have been consistently failing to meet these deadlines, and having funds recaptured by the Treasury as a result.

And at the end of this month, there's a final ERA One obligation deadline. So all uobligated ERA One will be recaptured from these slow spending jurisdictions, back to the Treasury.

We know that this is kind of complicated right? We've been tracking these, what are called involuntary recaptures by the Treasury from underperforming local jurisdictions.

We've been a little concerned that those numbers don't exactly line up with those reporting deadlines starting in the fall of last year, the Treasury outlines, in their guidelines. Can you say more about that? What are we seeing?

Yeah. So the Treasury published in it's reallocation guidance, which was released, last year, the procedure through which, it would recapture funds from jurisdictions that fail to meet these spending targets.

We have data for the expenditures of all the cities and counties in Texas that are participating in this program. And we've noticed that not all of the jurisdictions that fail to meet the spending deadlines are having funds recaptured. So it appears that Treasury is recapturing funds in a seemingly erratic way that deviates from the procedure, that it lined out in its guidance published last year, which is concerning for advocates like us, who are monitoring the evolving housing crisis in our state and predicting outcomes for low-income tenants. As advocates, we need to be able to rely on our federal entities, to abide by the procedures and guidance. that it publishes, before it, begins processes like this.

So to break this down, Treasury publishes these guidelines.

We're kind of on the outside trying to make sure that this money is effectively getting to the people that it needs to get to. but if Treasury isn't following the guidelines, as they've published them, it makes our lives really difficult because we're out there trying to convince jurisdictions that they're going to have money taken back.

And we're not a hundred percent sure because we're seeing some different outcomes, on what Treasury is actually recapturing from those guidelines, which is not to say that Treasury isn't recapturing money. We've had millions of dollars recaptured involuntarily from jurisdictions in the state of Texas. So we know that we need to be out there working with these local jurisdictions to one, spend this money, get the money into the hands of landlords and tenants who need it as soon as possible.

Or two, if they're not able to spend these funds down by the time Treasury is going to recapture them, that they create what's called a voluntary reallocation agreement with either the State of Texas' program, the Texas Rent Relief program, or another nearby or overlapping local jurisdiction that needs additional ERA funds and is eligible to receive them.

If Treasury, isn't providing accurate information about what and when, what they're going to recapture and when they're going to recapture it, it makes it very difficult to advocate, around where there are funds that are at risk of being lost. Now we're approaching what appears according to Treasury's guidance to be the final ERA One deadline for under-performing jurisdictions. Can you talk more about that deadline and why it appears according to the guidance to be different than the earlier deadlines?

So we've had, spending targets that jurisdictions have had to meet every two months, since September of last year, but we're approaching the final deadline.

At this point, the Treasury will recapture all unobligated funds. and there's no chance for the jurisdiction to get this money back, and to help their, their low-income household stay housed. So it's, it's an all hands on deck scenario to make sure that these funds are retained in the state of Texas, whether it's, through accelerating spending, if the jurisdiction accelerated spending, and these last couple of months that we don't have data from cause our most recent data is from January. And if they have not been able to accelerate spending, we're hoping that they're entering a voluntary. reallocation agreement, with more efficient programs like the State of Texas,

At Texas Housers, we have been tracking evictions in the state of Texas, and we know that throughout 2022, our eviction case tracker, shows that eviction cases across the state, and in Metro areas around the state have been, increasing rapidly in 2022. And we interpret that as showing that there is need for these funds. We have the need in the state of Texas, just because emergency rental assistance is drying up doesn't mean that there aren't low income people and their landlords out there who need it in order to keep families housed.

And so this makes it really difficult. We have this final deadline coming up for underperforming ERA One jurisdictions, but we also have, have a Treasury who has been as a word that you used. Erin was erratic in the way that they have been recapturing funds. Texas Housers is simply advocating that the funds that exist and have been allocated to jurisdictions in Texas, stay in the state of Texas in order to serve those low-income Texans and their landlords who need these funds. The need is there, as we've said, and the funds for now are there, if Treasury has a different plan for how they're recapturing these funds, they need to be clear about that because we're out there trying to work with these jurisdictions and many of these jurisdictions are working in good faith to try to one deliver the funds while they have them.

And, generally I think we have a sense that they are, willing and want to keep those funds in the state. Certainly Texas Rent Relief, the State of Texas program, wants those additional funds in order to keep them in the state of Texas serving Texas renters and their landlords.

Meanwhile, the eviction moratoria have ended. so evictions can proceed through the court and we know that they are. We know that eviction cases are rising. So there's an incredible need at all levels of government to really tackle this issue of preventing evictions because we have a rising crisis on our hands. The most immediate thing that we could do is at the state house. $3 billion in unobligated discretionary ARPA funds that the governor could sign off tomorrow to send that to Texas rent relief. We know according to the Census Household Pulse survey, that there's hundreds of thousands of Texas renters who feel that they could be evicted in the next and they feel it's likely that they will be evicted in the next two months. and if that $3 billion was obligated to Texas rent relief tomorrow all of those people could have their rental arrears paid off, and additional renters in the state of Texas who are behind on rent could all, we could make a significant dent in that we have the money available.

It's sitting on the shelf and there is need in Texas right now. And we need to have an all hands on deck approach to meeting that need.

We can see from data like the Pulse survey that renters are still in need in the state of Texas, but at the same time, the safety net that has kept, eviction rates at or below historic levels for the majority of the pandemic is drying up. and that is the emergency rental assistance program.

And so as the safety net dissipates, it should be, like you said, an all hands on deck approach to ensuring that more money is funneled into rental assistance programs and eviction diversion programs, to keep people housed, through the crisis that has continued.

Well, we can be sure that Texas Housers is going to keep on this and, attempt to work, at all levels of government with local governments and especially with, low-income renters, to try to make sure that these funds get into the hands of the people that need them while they're still there.