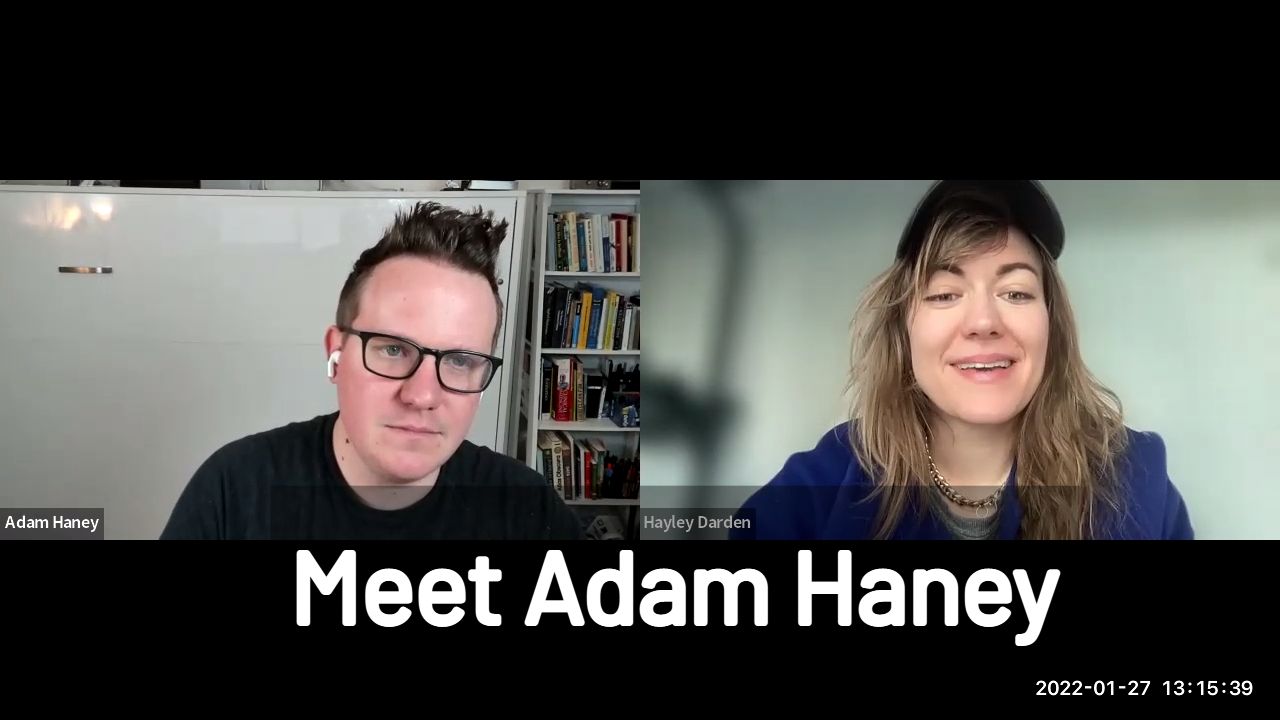 Hey Adam, thanks so much for taking time to tell me a little bit about your background why you're at Invisible and who would, or who wouldn't, like being part of your team.

Tell me a little bit about your background.

I'm a computer scientist by training. I've been at a couple of different startups, both successful ones and ones that I learned things from. The second startup that I worked on grew to over a hundred million dollars in the first two years of my time there.

That's the fun thing about joining a young company you have the opportunity to really stretch yourself and grow your career. And I think that's an exciting thing about invisible.

I mean, this is, this is the fun part.

Part of my journey was that I wanted to have a diversity of different size teams. So I have enjoyed and learned from a bunch of different perspectives as it relates to engineering.

So I know that you developed a reputation early on for being a Wizkid and tackling a bunch of challenging technical problems.

Yeah. I've had the opportunity to work in natural language processing and data science spaces I've had some really fun operational problems around capacity in different logistics teams.

I really enjoy the sweet-spot where you get to solve interesting engineering problems and work on things that aren't science projects and that have impact.

So you're kind of off whizkidding and solving bunches of challenging non-science experiment problems. Then you started to get really curious about the organizational context you're operating in. Where did that come from?

I became really interested, not just in solving the problems that were directly in front of me, but in the broader context... the design of organizations, the design of teams.

How do we come up with the ideas that we're going to work on? How do we engage with our product partners? And how do we not just solve tickets, not just close issues, but have impact through software? And so I'm very interested in creating a team environment that allows people to flourish.

The more that I can design a culture that allows curious people to dig in and and create value for the business, the more cool people that I get to surround myself with. And so I view the challenge of designing a high functioning engineering organization as a fun one.

So that brings us really neatly to Invisible and this chapter. Yeah. Why, why are you here?

Yeah, I mean, I'm, I'm excited about what the business is working on... this universal engine for organizing work, for organizing the things that people do . This idea of a universal process engine is really interesting.

It has parallels to different execution paradigms and computer science. But then you also sprinkle the people element of it. This isn't just a processor in this Intel sense of the word.

Is that an animal gone rogue?.

Yeah. Hold on one second. I'll get her. Have you not met my dog?!

She's mad right now. This is Bernie Sanders. She is gray and white and she barks at everything.

She's mad. I think she heard something outside of the apartment and she just can't handle that right now. She can't even, so she can't even... grrrrr.

Well, if Bernie acts up again, we'll just have to bring her in. I feel like she's got stuff to say.

So let's go back. You were talking about this attempt to universalize workflows and how that's done, cross-referencing people and machines.

So, so yeah there's a bunch of research in the computer science space to talk about different directived acyclic graphs and the way that they connect nodes with each other in different execution steps.

We're trying to generalize that in a way that can encompass computer driven automation, as well as people. And anytime that you interact with people the problems are harder, but they're also really interesting. So there's a human- computer interface component to this:

How do you use design those interfaces for people? But then there are also broader platform related questions...like how do you ensure the quality of these different processes? How do we verify that they're being executed on time? How do we understand the way the workforce interacts with them?

I love that we have this great talent pipeline of people from all over the world that we're able to create opportunities for. There's a, there's a lot of really interesting challenges here. So definitely, definitely fun.

So one of the things you told me that you value here is the ownership culture. Will you tell me a little bit about how that's personally meaningful to you as well as relevant to what you're trying to do here.

We are going to reap the benefits of the things that we build. I've worked at places where it's like..."Okay, if I work really, really hard on this particular thing, I'm going to make this publicly traded company, marginally more valuable to somebody other than me." And like, that's cool. But it's not very motivating for somebody that wants to bring a level of craftsmanship to the thing that they're working on.

I love the way you tied together how ownership motivates craftsmanship.

I love that because I think that it incentivizes people to say: "I'm not just going to build this... I'm not going to slap it together. I'm going to, I'm going to love it." That's like the difference between renting an apartment and owning a house. You treat things differently whenever they're yours and whenever you have a long-term vision for where everything's going.

I also think that ownership means we're all able to take a step back and say: "How can we make it better together?" We've set up some extremely transparent ways to make sure that partners have access to financials, operating metrics, and have a seat at the table for decision-making. It's a great way for engineers to have context for the problems they're actually solving.

In addition to that great work is rewarded. It's nice to be in a place where you're like: "If I do a really good job on this, it's meaningful to me, it's meaningful to people that I care about that I work with." We win together, we lose together... as a team. And that's, for me, a much better way to build things than at a Mega Corp.

For me, it's amazing to have this win-win relationship with the business . I feel like the better we do together, the better I do for me and the people I care about— and all the other ambitions I'd like to bring about in the world.

So who would love being on this team?

There's so many different kinds of people that love being on this team.

We have one person that has a Ph.D. in neural research. We have another person that used to be a manager for bands. We have people that live all over the world. I think that curious people fit well here.

We get together as an engineering organization and share, libraries and frameworks and techniques that we've learned. I think that that's how we all get better together.

If you want to go to your cubicle and only do a specific ticket and punch out, then you're probably not going to like it here.

As much as possible, we make sure that engineering gets to directly interact with different parts of the business, gets to directly see the impact of the things that they build and really gets to feel the love from the other parts of the business. Our VP of operations is fond of sending love letters to the engineering team as different features get shipped.

What I love here is that I, I feel that sense of like, the early days company with that excitement. It's like it's like we know something that everybody doesn't —like we all believe something that that other people don't know about.

And so there's a, a connection that comes from that shared struggle, shared...

I totally agree with that. I don't know why the magic of being on a sports team so often doesn't translate into being part of a company. But I feel sports team level bonds here.

Exactly. And that's, that's what I was looking for. And, you know, definitely didn't have at Mega Company. I love the people here and I can't say that for everywhere that I've worked.

So anything else you want to add?

It's interesting here. We've got every kind of process... like for everything. So, when the scope is "everything" , there are plenty of fun problems that come from that..

Well, Adam, thank you so much. It was fun for me to hear about the ways your interest in org design and engineering dovetail into the technical problem set that exists here.

And a pleasure to meet Bernie.

Yeah, she's asleep again by the way. She's back in our Tempur-Pedic mattress under the covers.

All right, I'll see you later.